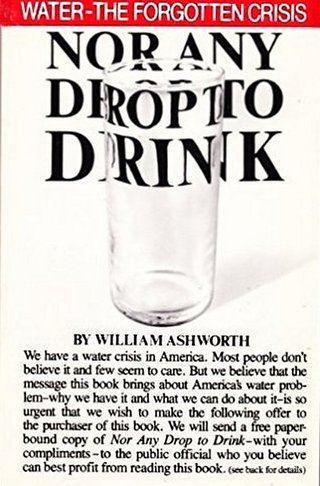 Nor Any Drop to Drink

"This broad-based general review of a multitude of water resource issues is one of the best nontechnical examinations this reviewer has seen....Highly recommended." --James R. Karr, Library Journal

Water crisis? What water crisis? Certainly we hear of droughts every summer in different parts of the country. But eventually it rains. We turn on the tap and the water always flows, fresh and clear. Right?

Isolated incidents? Unfortunately not. The ominous signs are everywhere. Across the country, lack of sufficient water pressure has forced local moratoriums on construction. Bottled water sales have jumped in the last two years because tap water everywhere is becoming unpalatable - or downright hazardous. Fishermen return empty-handed from once-teeming Adirondack lakes: Some of those lakes are as acid as tomato juice. Houston and Orlando are caving in on themselves because they have overdrawn their underground water sources. The Colorado River, on which seven states depend for water, is turning to salt. Our lives have already been touched in countless ways by water shortage, yet so far we've refused to see what William Ashworth clearly, calmly makes us see in this book: We are running out of water.
--from the jacket