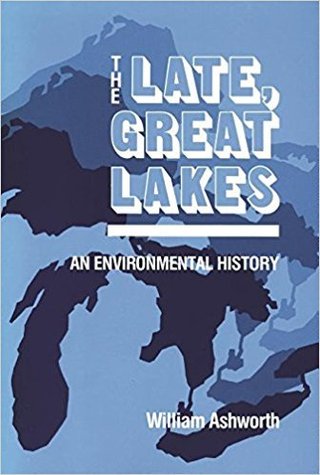 "A blend of contemporary newswriting, scholarly research, and personal observation that cunningly injects daunting quantities of information into an inviting prose style."
--The Los Angeles Times

Citation "In recognition of a notable contribution to the documentation of life in the United States of America" by the Colonial Dames of America, April 29, 1987

The problem, perhaps, is one of perception. We always treat things as we perceive them; and if they are perceived wrongly, they will be treated wrongly as well.

The way we perceive the Great Lakes is implicit in the way we have named them: the Great Lakes. To name something is to classify it, and we have classified the Great Lakes with all other lakes on the continent. They are supposed to be bodies of still water surrounded by land - minor features, temporary interruptions in the landscape. But they do not fit the mold.

Once with geologist Larry Chitwood I followed the coastline road around Wisconsin's Door Peninsula, an eighty-mile-long, eight-mile-wide sliver of Silurian limestone that juts out into Lake Michigan like the point of a giant neolithic knife, separating the main Lake from Green Bay. Up the Green Bay side, out to the tip where the Door itself lies, the Porte des morts, Door of the Dead, the rocky strait that forms the entrance to Green Bay and has killed so many ships and men, and down - I almost said "down the ocean side." Down the Lake Michigan side. On the Green Bay side the road stayed mostly high, with views from the bluffs over the endless water. The bluffs were white limestone, cradled in green foliage; the water was blue, from that distance; it was lined with narrow, bright beaches. The beaches made graceful curves at the feet of the bluffs. At intervals the road came down to edge the water, and there were towns: Ephraim, Egg Harbor, Fish Creek, Sister Bay. Pictures from a New England guidebook. No wonder they compare the Door to Cape Cod. But not an "inland Cape Cod," please; there is nothing at all "inland" about this place. Just accept the fact that the United States has a coastline to the north as well as to the east and west. Wisconsin and Michigan and Ohio and Minnesota and the rest are seaboard states. It is of very little import that the sea they lie upon happens to be saltless.

Toward evening we drew up at a small coastside park called Cave Point, found an empty picnic table, opened our ice chest, and spread out a Travelers' High Tea - crackers and cheese and apples and German sausage and cold, condensation-beaded cans of Budweiser beer. The park sloped gently eastward, like the entire peninsula; it was green, a grassy sward amid maples. The grass swarmed with picnickers. A park like any other, and yet not so: for it was chopped off. A hundred feet or so to the east of our table the land and everything on it ended abruptly in a ten-foot-high ledge, and there, suddenly and without any preamble, was the Lake. North, south, east, there was nothing but Lake. The Lake extended to the horizon; the horizon blurred and disappeared; the Lake went on. The ledge dropped straight down, and the Lake had undercut it, forming coves and caves. In the coves and caves the surf slapped and pounded, the white spray flying. Long swells swept in from beyond the horizon, pounding onto the undercut shore with a hollow booming sound, falling back with a monstrous sucking, like a huge tongue pulling away from the roof of a gigantic mouth. I had never heard that sound on a lake - only on the ocean.

Neither, apparently, had Chitwood.

"You know," he mused, "calling these things lakes is not only inaccurate, it's downright dangerous. For the Lakes, I mean. If we called them seas, it might be easier to protect them. What's the significance of losing a lake? If you lose a sea, you're losing something important. Losing a sea sounds big and serious. Losing a lake - well, it just seems too local to worry about."

That is precisely the problem. Yes, we have made some progress since the 1960s. Yes, the eutrophication problem in Lake Erie seems under control; yes, we have established National Lakeshores at Sleeping Bear, and the Pictured Rocks, and the Indiana Dunes, and the Apostle Islands. Yes, there has been proper indignation over - and even some proper treatment for - the Waukegan Harbor PCBs and the Silver Bay asbestos tailings and the hazardous-waste dumps along the Niagara and the abomination that was once the Grand Calumet River. Yes. But we are still calling them "lakes." And we are still killing them.

When are we going to learn?

--from the final chapter