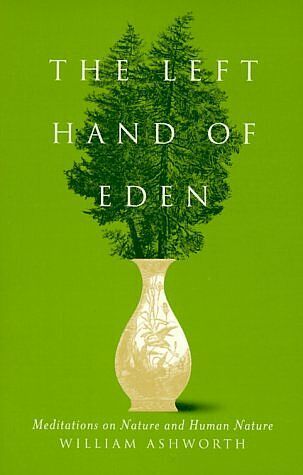 --Lee Gutkind, from the citation for the 1999 Oregon Book Award

"A delectable mix of lyricism and provocative thought."

The Left Hand of Eden: Meditations on Nature and Human Nature

Winner of the 1999 Oregon Book Award for Literary Nonfiction

" Forthright, lucid, and as in love with the universe as his heroes, Thoreau and Edward Abbey, Ashworth explains why efforts to protect individual species and officially designated patches of wilderness do nothing to change the attitudes that caused the mess or ensure a more sensible future. Each finely honed and provocative essay prepares the ground for the next." Donna Seaman

This book is about the disharmony that exists between the laws of nature and the laws we use to protect it. It is about unity with nature, but with a twist: rather than bemoaning the lack of this unity in our lives, it points to the problems caused by our failure to recognize that it is there all the time. We are all of us, always, subject to natural law. We can manipulate its results, but we cannot change its operation; we may be able to mask its effects on us for a while, but we will never be able to eliminate them.

As a society, we are in deep denial about this. The development community and the preservationist movement share alike in this denial. Both assume that the laws of nature are somehow modified or suspended in the areas we have developed, and are fully released only in the areas we have preserved. One side wishes to release more; the other side wishes to suspend or to modify more. That is the extend of their disagreement.

Both civilization and preservation, however, are human inventions. The borders we draw between them are human borders, totally unrecognized by nature. As a result, neither civilization nor preservation act in the manner we think (hope; wish; demand) they should. All things on the planet are subject to the laws of nature first and the laws of humans second. Where the two come into conflict, it is always nature that prevails.

This is not the myth we grew up with. We were taught to think of nature as Other: tame versus wild, city versus country, farm versus forest, woodlot versus wilderness. Some have seen in that dichotomy an excuse for civilizing - for cutting, for converting, for removing raw materials for "beneficial use." Others have preferred preservation: a lockup, a line in the sand, a place apart where the Other may live unbounded and unkempt. Neither side has seen the truth: that nature can be neither civilized nor preserved. That "nature," as they conceive of it, does not in fact exist. Only the universe exists, and we as part of it, affecting everything we touch and either flourishing or withering by the result - as does all life.

The word "nature" comes down to us from the Latin natura. It was derived from natus, "birth," and in its original usage it simply meant physical kinship - the innate characteristics and traits shared among family members as a result of their common genetic heritage. We use this sense of the word today when we refer to "human nature" or to "the nature of things." But natura was also used in Latin to differentiate the natural world - the "world of born" - from the manufactured world - the "world of made" - and it is the twist we have given to this alternative meaning that has got us into trouble. For the Romans, the second meaning was a logical extension of the first, a means to distinguish the innate characteristics and traits of the world from the uses to which we have put them. For us, it has become a separation between two radically different types of reality, the works of God on the one hand and the works of technology on the other. We look at our cities and our automobiles and our computers and our TV dinners and think we have created something. We have not. All we have done is use pre-created rules to put pre-created things together in new ways.

This book is couched as a collection of nature essays, and because of the subject matter it has been necessary to use the "n-word" many times. I have tried to hew close to the meaning as understood by the Romans: nature as the heritage we start with, rather than as the ideal we worship or the enemy we conquer and then banish. "Nature," in these pages, may mean a set of shared, inherited characteristics - human nature, bear nature, the world's nature - or it may mean the world of born, the pieces of the planet (any pieces, perhaps as small as weeds that have anchored themselves in cracks in a sidewalk) that we humans have not yet significantly manipulated. Only rarely will it mean something apart from us, and only then to discount that faulty and dangerous idea. The Otherness of nature is a myth that has controlled our lives long enough. It is time to put it aside, as any ancient and outworn mythology is put aside, and move along.