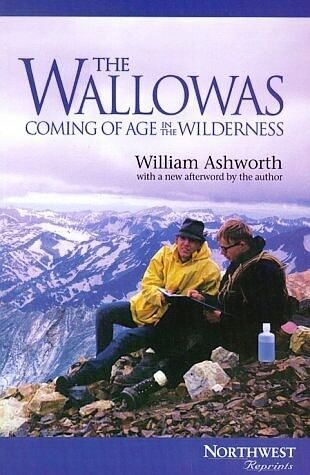 "Night, at that height, did not fall. Night rose; it rose out of Thorpe Creek, out of the Hurricane, black shadows creeping stealthily to our feet up the cold slopes. For a long moment after dark had swallowed the canyons we rode a swath of pink-tinged snow between two dark and silent seas. Then, slowly, the pink faded. Overhead, the stars were twinkling into being."
--from Part II ("Understanding"), Chapter V

The Wallowas: Coming of Age in the Wilderness

"An autobiography at once poetic, philosophical, and exciting....No one who reads [William Ashworth's] book can fail to understand what the wilderness means to all life. This is a work that prods the conscience, as well as superb entertainment."

Excerpt from the Author's Afterword to the 20th Anniversary Edition

The Wallowas is really two books. It is a memoir of adventure in the wilderness, but it is also an account of a search. For what? The reviewer for the New York Times Book Review (May 14, 1978) had it about right: "What William Ashworth sought in nature was himself - his meaning and his place." That, and a place to piss. There are an inordinate number of urinations in this book, though less than there might have been. On the advice of several people who read the original manuscript, I took some out. I would take out a lot more today.

No, on second thought, I wouldn't. The Wallowas is a young man's book, and it reads the way young men talk among themselves, full of bluster and self-discovery and scatology. Every college bull session is the first one ever to explain the meaning of life completely using nothing but four-letter words, and those I was involved in back in the early 1960s were not unique. What was different about them - and what gives this book its special place in my heart - is that I wrote some of them down.

I have sometimes been asked if I still agree with everything I wrote here. There is no short answer to that question that does not get some of it wrong. I have some arguments with the callow youth who wrote the book, certainly. He was an active preservationist: I have come to distrust preservationism, and have begun placing most of my energy into building sustainable forests and communities instead. He believed in command-and-control: I now favor the carrot over the stick, and much prefer to work toward win-win situations instead of trying to coerce right behavior with the blunt end of a legal instrument. Winston Churchill is supposed to have once remarked that if a man is not a liberal at the age of twenty, he has no heart; but if he is not a conservative at the age of forty, he has no head. I think I have made it past fifty with my liberal heart intact, but there is no question that a certain amount of pragmatism has begun to creep in. I prefer getting things done to getting them ideology correct. If I have to choose between pure motives and pure water, I will take the pure water every time.

But in a deeper sense, I have no quarrel with anything at all in these pages. The book isn't an activist's manual, after all; it was not written to explain how we should protect wild places, but why. And for this task I still think I got it exactly right. "He found," wrote that anonymous New York Times reviewer, "that his goal was not to conquer nature but to embrace it, to take its spirit into his own." Note to the New York Times: he continues to find the same thing today. The importance of wilderness - I believed then, and I believe now - is that it is the easiest place for we humans to reintegrate our lives with nature. And performing that reintegration was then and remains now the most urgent task we face. The vast majority of the race seems to feel that the natural world is something apart from us, to be conquered or to be preserved - it depends on one's politics - but to be kept aggressively separate in either case. It is not. We are part of it and it is part of us, to be loved and protected certainly, to be used necessarily, but most of all to be lived.

That is what The Wallowas still does for me. It reminds me of the manner in which I learned to live my own integration with nature. Possibly it will help you discover how to live yours.